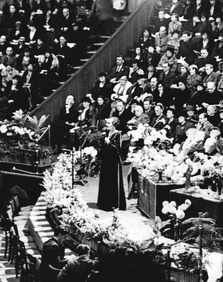 Every medium who serves publically should aspire to the level of the late British medium Estelle Roberts shown here before a packed crowd at the Royal Albert Hall. She was renowned for her commanding demeanor and stunningly accurate public demonstrations before thousands of people. She even demonstrated in the inner chambers of the House of Commons (the British Parliamentary chamber) in an effort to legitimize the religion of Spiritualism!

Today, some of what is called ‘public demonstrations of mediumship’ is sadly very different than what was done by the great mediums of the past. My demonstrations are firmly rooted in the examples of the great mediums of the past and are known to be spiritual, yet highly evidential, with a natural humor and often an entranced presence. During these demonstrations, I endeavor to integrate the essence of the spirit communicator into a sacred communion with the recipient. These demonstrations are an uplifting experience for everyone in attendance. Due to the Divine nature of these spirit communions, public demonstrations of mediumship cannot and should not be viewed as entertainment, a performance, or a show [see the paper I coauthored with medium and academic Andy Byng titled “Platform Mediumship: Acts of Sacred Communion or Mere Performances?” They are a sacred and inherent part of the religion of Spiritualism.

A public demonstration of mediumship I really like can be viewed here.

Another demonstration of mediumship I really like can also be viewed here.


A demonstration of mediumship was given before a capacity crowd at Royal Albert Hall in London on March 31st, 1948, on the 100th anniversary of the rapping manifestation at the Fox cottage which heralded the advent of Modern Spiritualism.

Below is part of this demonstration given by the medium Helen Hughes on that evening:
To a person in the hall, Mrs. Hughes described an old gentleman and with him, Jimmy Brown. “I’ve got to tell you,’ said Mrs. Hughes, “that he has found out all about George who, when in the body, was a bit of a mystery. He was at your home on Sunday and heard all the good things you were saying about him, (Yes, replied the person in the audience) but he says he was not as good as all that. He wouldn’t change places with any of you. I get the name Alma.’’ (That is my name). ‘‘Do you know Doris?’’ (My sister) ‘‘Have you been laying down the law to Arnold?” (Yes) “He says you had a dickens of a time, but don’t be so dogmatic; Arnold will come to it eventually. Have you been trying to convince him?”(Yes, rather) ‘‘Arnold will come to an understanding shortly, take your time.’’
Below is part of the demonstration given by medium Estelle Roberts on that evening:
“I want someone named Mrs. Andrew,” said Mrs. Roberts facing the body of the hall. A lady responded. “Your husband is here, and is calling you Mary.” (Yes, that’s my name.) ‘‘He on the platform and I have never seen anyone so excited before. Has he recently, passed over, about four or five months ago?” (Yes, only six weeks) “He has met John - known as Jack.” (Yes.) “He says that the pain that he endured in the physical body has all gone, he can now walk about everywhere. ‘Give my love to the boys’, he calls. He will be with you on the anniversary in June.” (Yes.) “As soon as it is possible he will help to adjust your physical condition especially your arms, legs, and feet.” (That’s true) “I do not know you, do I?” (No.)


Legal notice/disclaimer: Per New York state law: any type of reading is for entertainment only.
Maxine Meilleur is a psychic medium who facilitates communications with the other side or offers advice. While Maxine has confidence in the messages passed on through sessions she conducts, she expects that clients use rational thought and common sense before deciding to act upon said messages. By agreeing to participate in a public or private session with Maxine, potential clients are expected to be age 18 or above and not to be under the care of a doctor for any type of diagnosed psychosis or related disorder. Maxine is not a medical professional, lawyer, counselor, accountant, law enforcement agent, private detective or anything other than a psychic medium and any information or advice given by Maxine is not to be used in place of any medical, legal, tax or financial advice or diagnosis from qualified and licensed professionals in those fields. Readings by Maxine are intended to offer insight into your personal life and do not in any way constitute medical, legal, tax or financial advice. All payments made to Maxine for phone readings are expected to be made from individuals who are well equipped to pay for such sessions using their own funds. Maxine will not be held liable for the actions of any client or for any damages resulting from the use of this website or as a result of any reading or appointment with her, or any persons or events related thereto, and/or any actions or decisions that you may make as a result, including without limitation, actual, incidental and/or consequential damages resulting from any claims resulting from any act or omission, negligence, fraudulent misrepresentation or otherwise, including without limitation, personal injury, death, loss of income, stress (emotional or otherwise), errors or omissions, or otherwise.